Creative thinking has become the most valuable skill set of this century. In the world of gastronomy, the ‘sharing’ of food and drinks has become a prominent part of today’s culture. One morning, the rock-‘n-roll kitchen rebel Vincent Florizoone (Grand Cabaret, Nieuwpoort) came up with the idea of organizing an international culinary party on the beach: with Flemish Foodbash he succeeded in transforming the plain beach of Oostduinkerke into Earth’s best restaurant.

For this summer edition the sky was definitely the limit. 81.000 dishes were prepared, in a kitchen island from 176 square meters, by a team that had already gained 25 michelin stars in total. Chefs, mixologists and brewers had the pleasure of making direct contact with their guests while putting their heart in their creations. The ‘work hard play hard mentality’ set an incredible relaxed atmosphere; the echoes of the crowds’ cheers lingered over the beach until early AM. 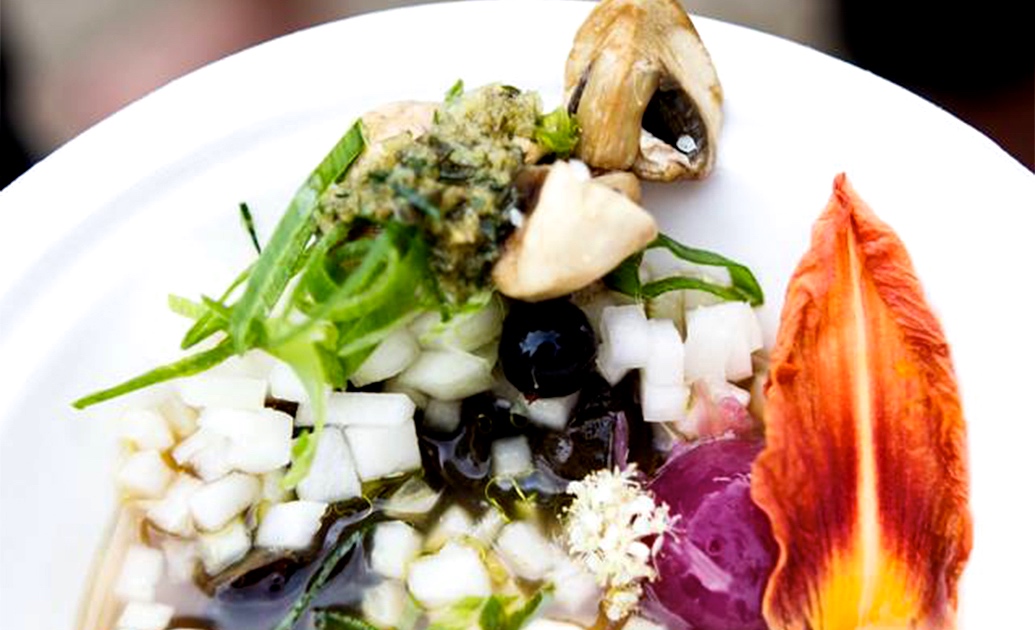 The eccentric cuisine of Sang-Hoon Degeimbre (L’ Air du Temps, Liernu) epitomizes the food we want to create at Foodpairing. As a Korean Belgian citizen, he drew inspiration from his background and combined local ingredients (12 snails, ‘petits de Bierwart’ ) from a local producer near Namur with Asian tofu noodles. Other ingredients he used for his dish came straight out of his garden. He prepared his tofu noodles by boiling water with methyl cellulose which he then added the pureed tofu. He garnished his dish with flower blossoms and herbs for a touch of elegance. This final touch could have taken over the overall taste of his dish however, he preserved the delicate taste by ensuring that the edible flowers he added had similar flavours. 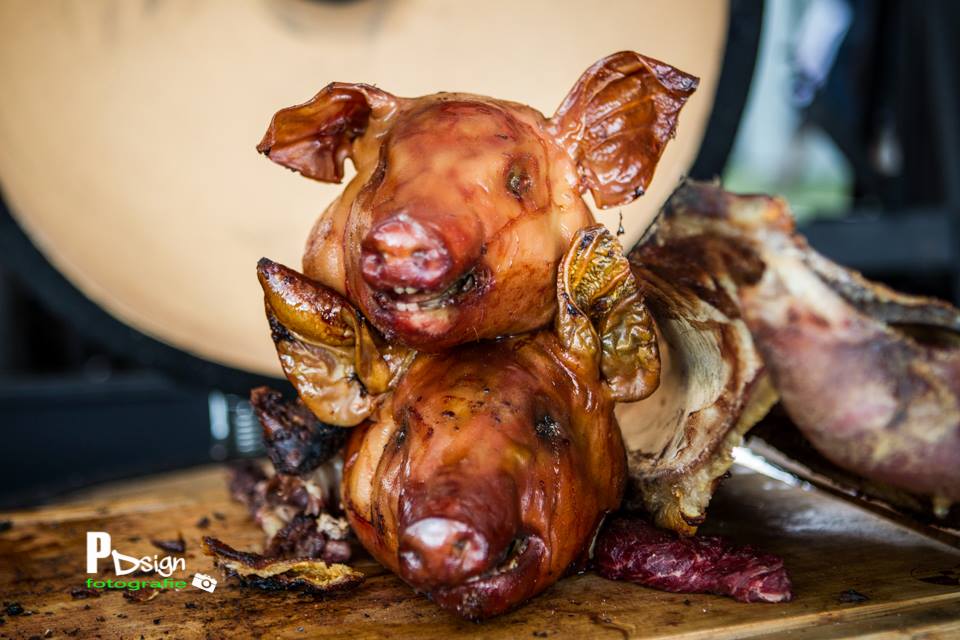 Of course, many of the chefs present, couldn’t hide their origins. King of ‘West Vlaams rood rund,’the red breed from West Flanders, is definitely Hendrik Dierendonck (Slagerij Dierendonck, St. Idesbald). The secret of the signature beef is the ripe taste, a result of the of time it takes to raise the cows. Most cows live two years before they’re slaughtered; Hendrik however, refuses to do so until after four years.

“Steak tartare with a cream of herb-roasted eggplant, cherries and tomato based caviar. That’s what an explosion of flavours really tastes like – just imagine the mouthwatering combination of juicy tomatoes and cherries.”

Hendrik himself brought a suckling pig with him which he stuffed with pig’s head and blood, caramelized apples, pickles from sweet onion and a mousseline sauce based on the Struise Brouwers beers. To enhance the experience of the dish, he served this “piggy” on crusty artisan bread.

Also present, was one of the female startenders – Sofie Ketels (Sofie’s Living Room, Koksijde) – who used Foodpairing to serve a matching ‘West Vlaams rood’ drink. She ended up calling it Miss Piggy, a cocktail made with a Bourbon infused with Hendrik’s smoked bacon in a fatwash . 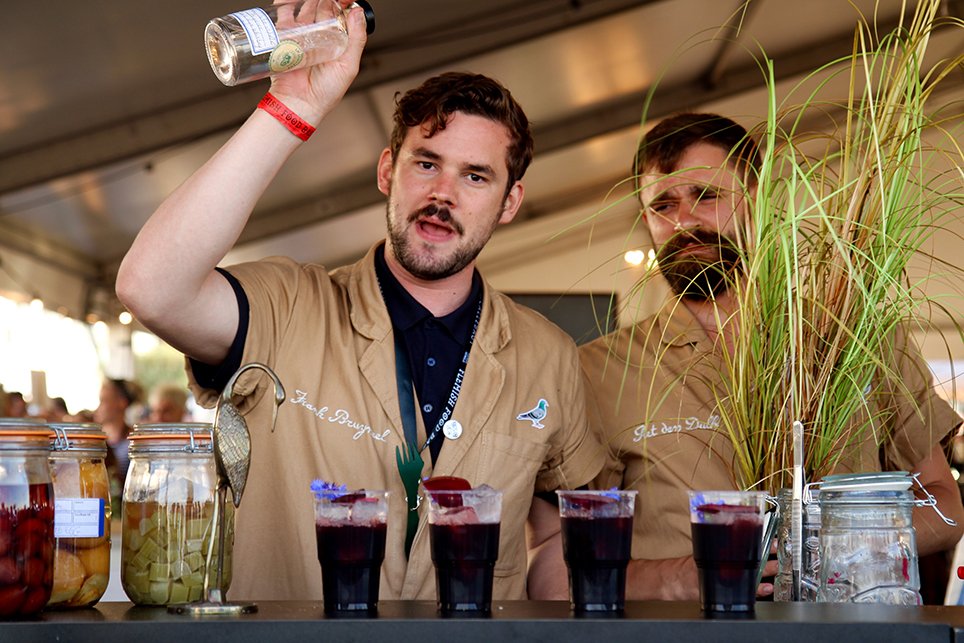 Most mixologists were encouraging each other to step out of their comfort zones by trying unusual  or unknown ingredients. The flavour possibilities originating from the flemish terroir are almost endless. For example: Jan, Ran and Hannah Van Ongevalle (The Pharmacy, Knokke) created a vegetable beer-cocktail by combining genever, star anise syrup, lemon juice, celery bitters, clarified seawater, ginger beer and some homemade tincture.

Jurgen Nobels, the newborn Belgian Best Bartender according to Diageo, served us a highball with the best of Belgium; IPA beer from Struise Brouwers, pink grapefruit and elderflower cordial. Nevertheless, the biggest crowd was standing in front of Erik Lorincz (The Savoy, London) and Marian Beke (Nightjar, London). Erik mixed barley with blended whisky with aromatized wines and fruity notes. The secret ingredient was surely the roasted seaweed syrup, which made this cocktail a true after dinner delight. The Armenian Gegam Kazarian prepared a whiskey based cocktail with figs-infused wine, coffee, orange and a bitters mixture. 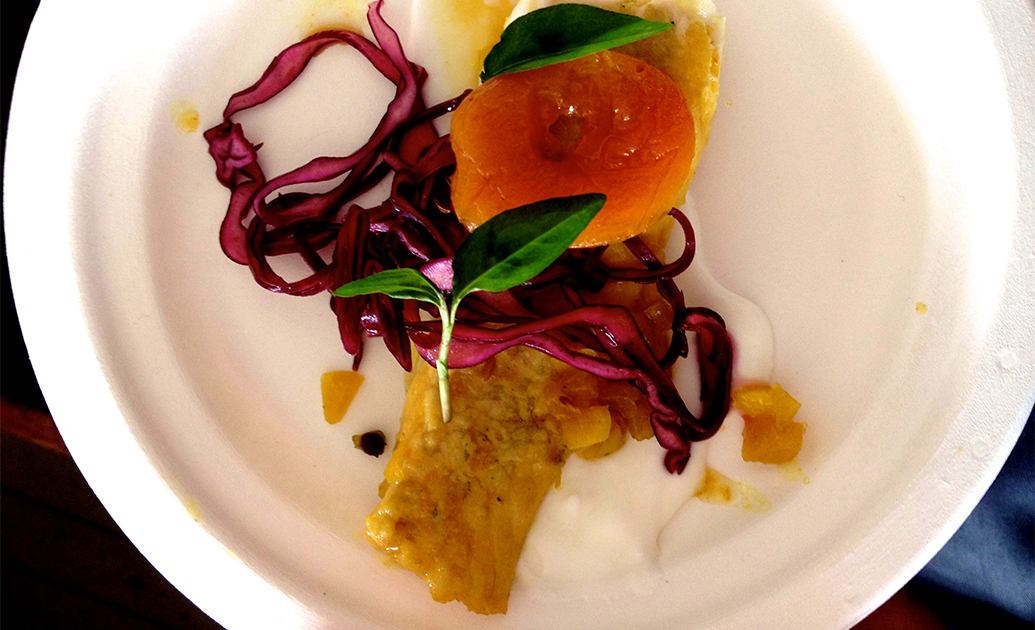 Flemish Foodbash even got a visit from a South African chef who showcased a dish featuring Cape Malay Piekelvis, apricot, mebos, cabbage and masala while the sun was going down. To pickle his Atlantic pomfret fillets, Kobus Van Der Merwe (Oep ve Koep, South Africa) composed a personal spice mix using seeds of coriander, cumin, fennel and fenugreek. Just before serving he placed the cold pickled fish on top of some yoghurt, and added cooked apricot mebos together with a pinch of cabbage pickle. Spiced sweet and sour pickled: you could literally taste the cape nearby. 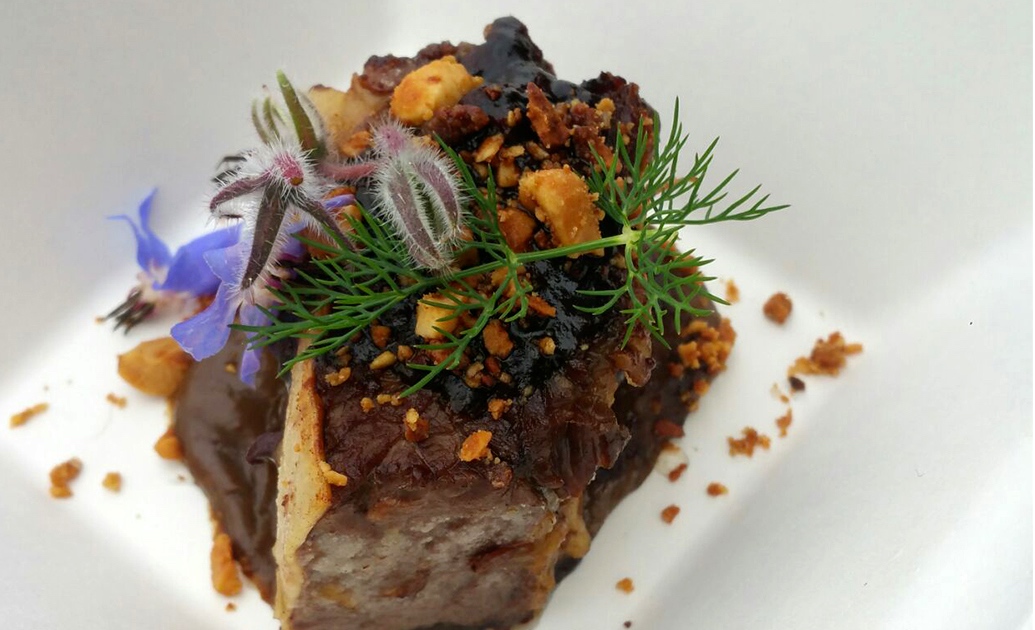 The same goes for the bitter and sweet composition based on pork belly, eggplant, coffee and fig made by Jonathan Stranger (Ludivine, USA). To a reduction of caramelized figs and shallots he then added some coffee and creme de cacao. For the smoked beef to pair well with a puree side dish, Jonathon had the idea of roasting the eggplants in the oven. The most surprising touch however came at the end, when a syrup of dandelion flowers and lemon slices balanced the bitterness of the coffee, figs and chocolate. 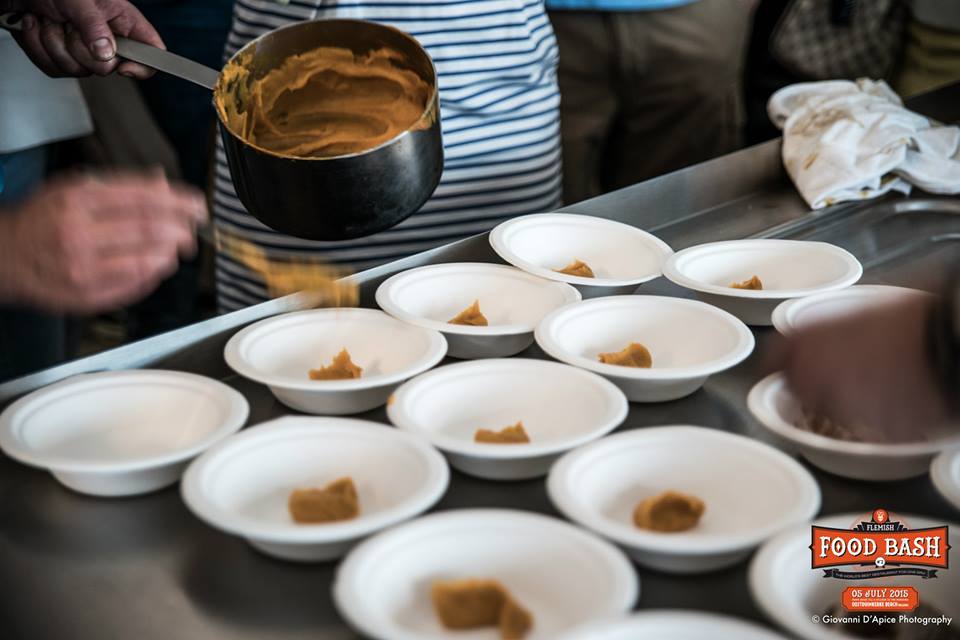 Unique combinations from Spain, The Netherlands and France

Spanish cuisine was archetypically represented by Maria José San Roman (Grupo Gourmet, Spain). She interpreted a refreshing gazpacho as an irreversible sign of summer by adding tomatoes and strawberries to the overall dominant Spanish kitchen ingredient, olive oil. To surprise the hungry foodies at the beach she even garnished her soup with mint asparagus and egg yolk.

Foodpairing also witnessed the northern cuisine of the dutch Edwin Vinke (Kromme Watergang). Living by the sea, Edwin considers the oysters his muses. He created the ultimate wicked experience by preparing ‘the ultimate oyster margarita’ and combining it with a croissant of seaweed. By doing so, he lifted an unknown product such as seaweed to upscale foodpairing, using mezcal and tequila as his starting points.

Besides, it was hard not to get in touch with groundbreaking chefs, playing with different textures and shapes. Patissier Laurent Favre-Mot from France succeeded in combining raspberry and red berry tea with Mediterranean olives, hot Tunisian harissa and bamboo charcoal. No wonder he is called the rock-n-roll patissier of Paris. 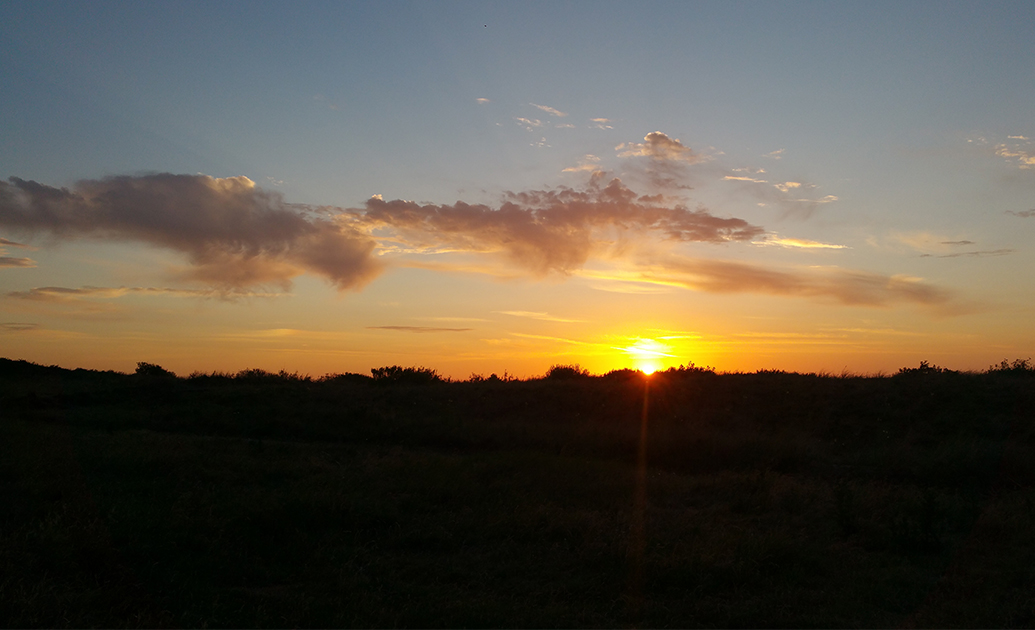 Uptown funk with bare feet in the sand

After an impressive 18 hour culinary festival (from 12.00pm until 06.00am) it was very likely that you’ve not only eaten yourself a way into paradise, but also tired your feet out with all the dancing. DJ Paco Velghe (Bar Lafayett, Ostend) effortlessly healed us with his soul Ostendaise. Just listen to Marvin Gaye and jazz & chanson classics and you’ll get the gist of his magnificent music style. Just what I needed for a great summer evening to be complete. When getting the sand out of my shoes at home, I knew I could consider it a fact that the world of drinks and foods will forever be intertwined with the explorations of new flavours and combinations. Or, as Erik Lorincz said:

“the only difference is that chefs are using fire and bartenders are using ice to combine delicious flavours.”