Honey is the oldest known sweet substance. It is probably at least ten thousands years old, and in comparison to commonly used table sugar, is a real gaffer. Honey is also healthier (if it can be said in the case of sweeteners) than other sweeteners, thanks to additional minerals, vitamins and nutrients.

Honey is produced by the inconspicuous, sometimes annoying bee (Apis mellifera) that originates from India. At the beginning, the essential substrate is needed—nectar. Flowers produce this sugar-rich liquid to attract pollinating insects and birds. Sometimes other nectars from plants, honeydew, or secretions from bugs are also used. Bees collect the juice with help of their long tube-shaped tongue. Then, nectar passes it into a special storage reservoir sac (called the honey stomach) until they return to the hive. Salivary enzymes and proteins are added to the nectar and break down the sugars and raise the water content. Additionally, their hairy bodies pick pollen up from the flower’s anthers.

Finally, nectar arrives in the hive, but it is too runny and prone to bacteria and molds, so concentration is needed. It is transported from bee to bee, each adding saliva containing different enzymes, and pumped in and out of them again and again for 15-20 minutes. This forms a thin droplet under their proboscises. Then, they carry the syrup in a thin film on the honeycomb, which is the network made from secretions of the wax glands of young workers. 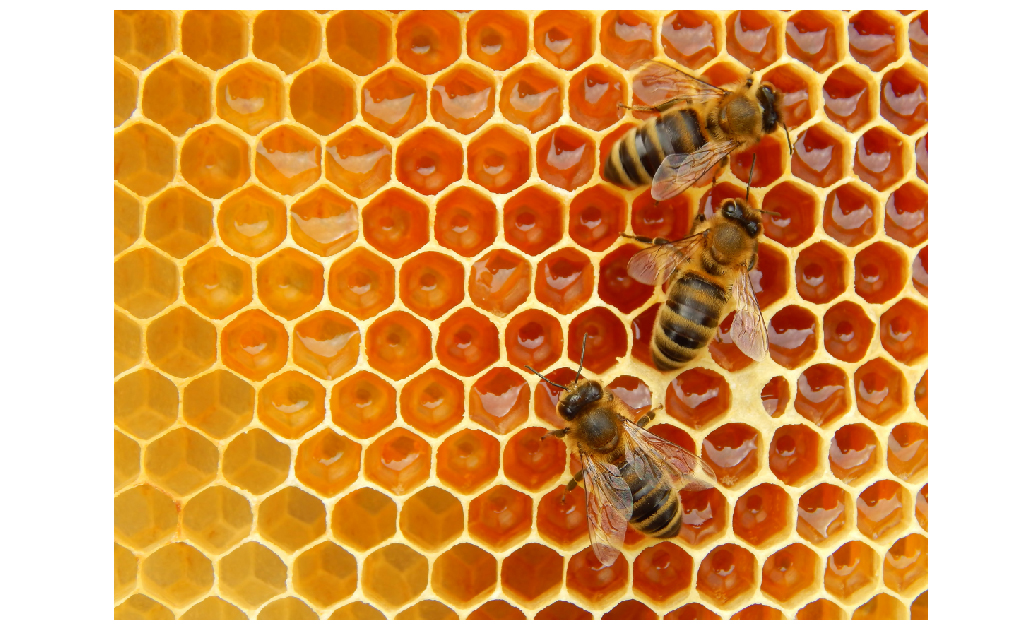 As honey has a high content of water and natural yeasts, it is susceptible to fermentation and therefore, bees fan their wings to circulate air and evaporate water which decreases to 18%. That is the saturation point of sugar and fermentation is not possible anymore. Ripening is not only to evaporate water but also to create a delicious flavor and nice color. During this step, many different enzymes are at work, intensely converting sucrose into fructose and glucose, as well as oxidizing some of the latter into glucuronic acid and peroxides. This ensures microbial safety due to decreasing pH and having antiseptic properties. Many different chemical reactions take place and a variety of changes in colour and flavor occur. When ripening is finished, bees cap the honeycomb with fully ripened honey with a waxy layer.

The honey is now ready for the beekeeper to harvest. It is typically centrifuged into separate liquid and solid particles as wax in honey pendulum. Then, honey is ripened and heated to 35ºC. The temperature destroys yeasts which could continually ferment sugars. To remove other debris and foam on top, the nectar is strained and filtered under pressure. Then, crystallization takes place by mixing it twice or three times per day. Sometimes, older honey is added to help speed up the process.

The chemical composition of each honey is distinctive and depends on floral origin, geographical region, and storage conditions. The aroma profile is formed by a complex mixture of volatile compounds (in very low concentrations) which may have different sources: nectar, honeydew, bees and their work, microorganisms, thermal processing, or aging. Honey contains not only sugars but also proteins, amino acids, vitamins, phenolics, organic acids, and volatile compounds. All of them can be transformed into other products during long storage or temperature, enzyme activity, or Maillard reactions. Therefore, a new aroma profile is created from these versatile compounds, such as refreshing alcohols, floral aldehydes, ketones, acids, fruity esters, terpenes, nitrogen compounds and spicy or rancid carboxylic acids. 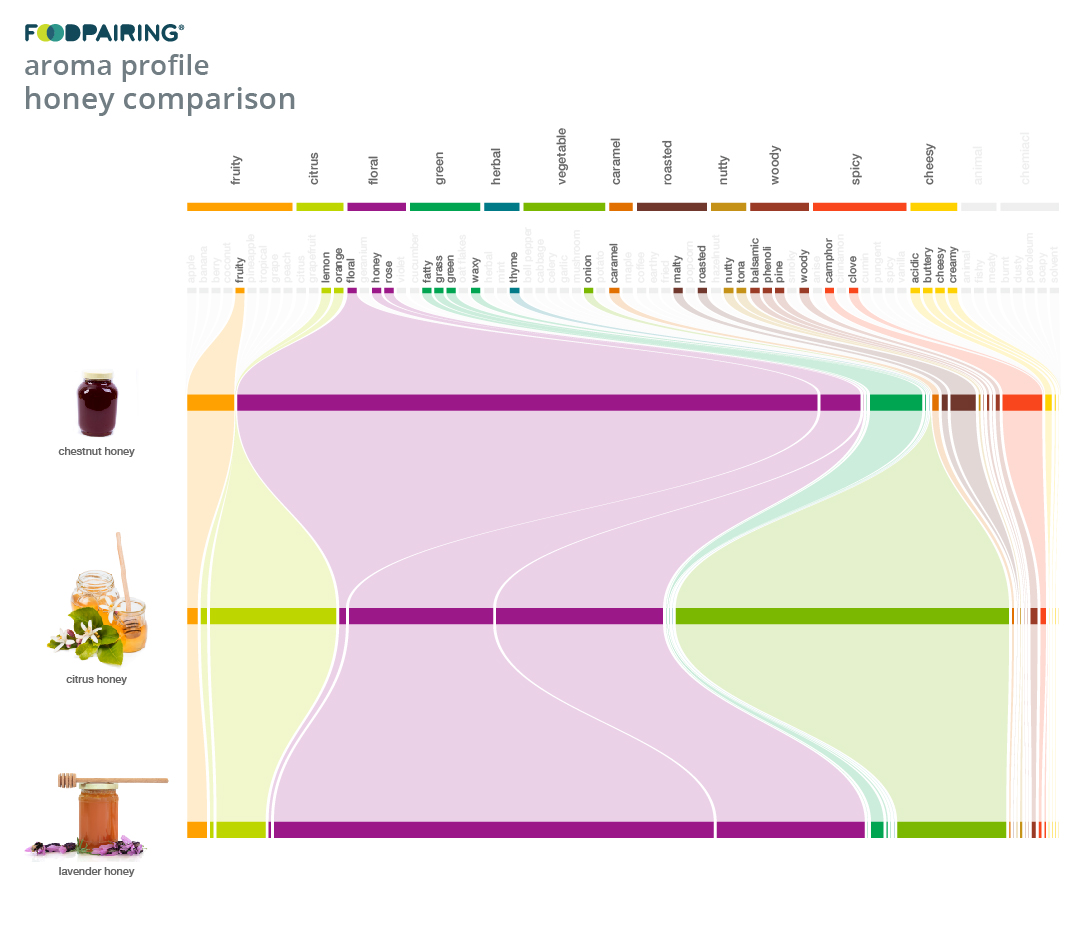 Odor-active compounds are more intense in honey than in blossoms, thanks to complicated reactions that take place during production and storage. The authenticity of rape honey could be confirmed by the presence of dimethyl disulphide and absence of 2-methyl-1-propanol at the same time. Dimethyl trisulphide indicates for rape pollen in it. In general, this type of honey has a quite poor aroma complex but many sulphide compounds. 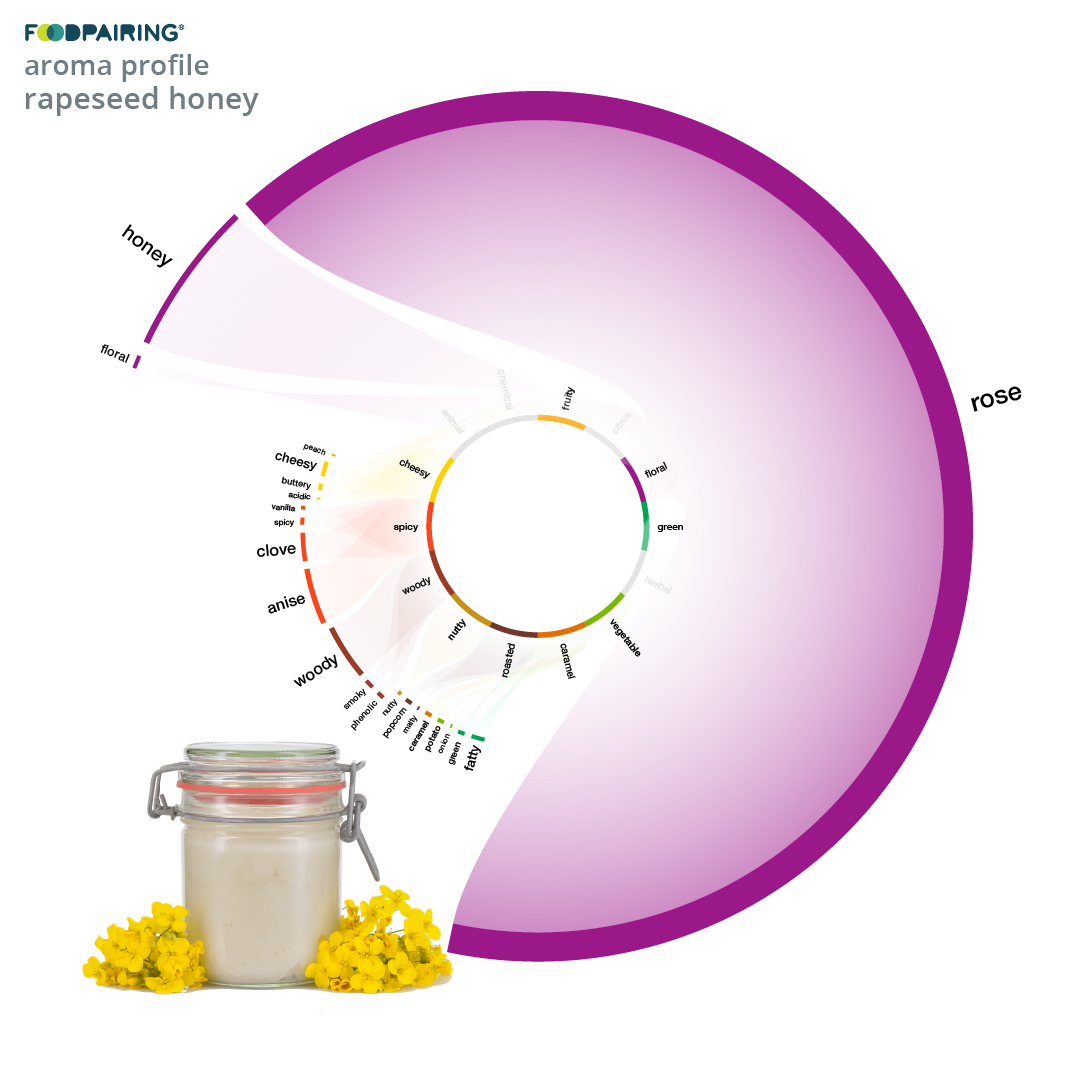 There are some major differences between rape flowers (some odorant active compounds) and honey made from the plant, which indicates the importance of bees’ work and their impact on the flavor. The most palpable difference is the rose note, which is very intense in honey but almost unnoticeable in the flower. The flowers have undertones of geranium, indole, and typical honey-like aroma, which is lower in the final liquid but ß-damascenone compensates for it with additional fruity tones. Rape honey is also characterized by a complex spicy profile with extra vanilla, clove, and anise nuances. The flower blossoms contain the unique roasted, popcorn-like notes, which are slightly detectable in honey. Acids introduce a sour smell with cheesy undertones.

Discover your own honey pairings with our Foodpairing® Tool by subscribing now. Already have an account? Log in. 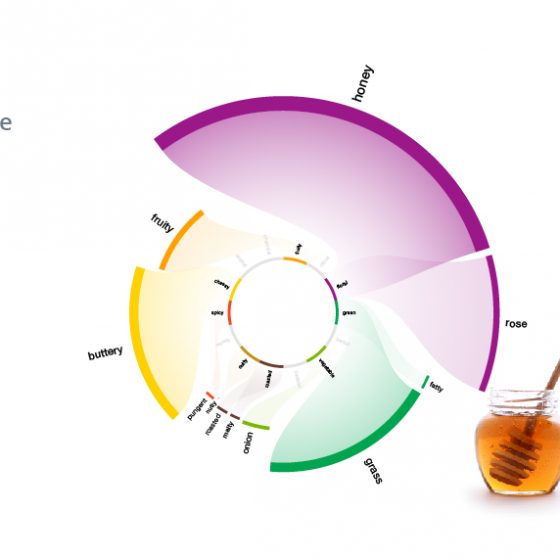 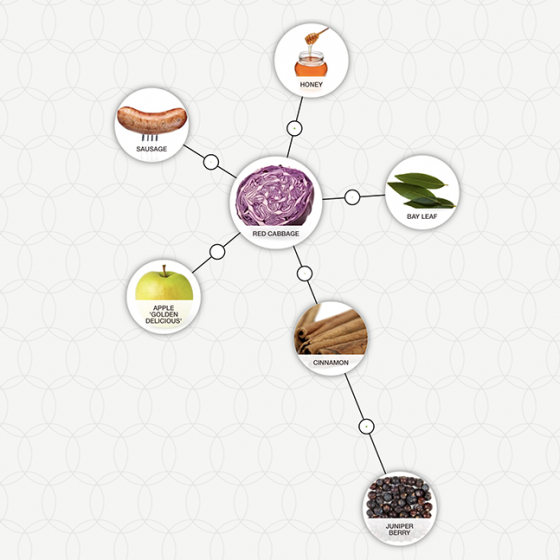 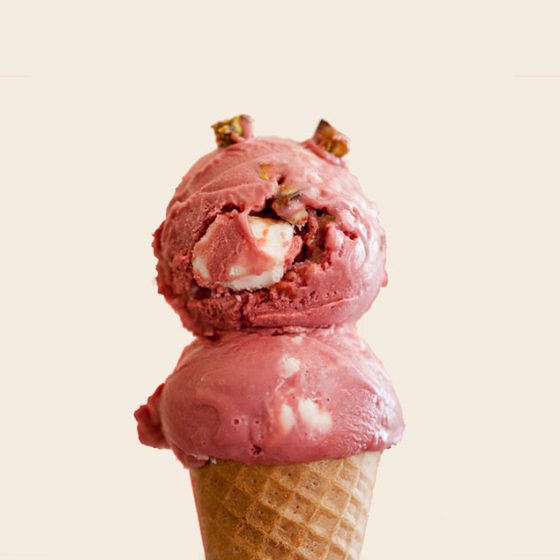