What to pair with your Thanksgiving turkey?

Since the holiday season sends chefs and home cooks alike into frenzied searches for recipes that’ll impress, we thought we’d lend a hand in the kitchen this year with an aroma analysis of—you guessed it—roast turkey. Many of you have asked what ingredients to pair with the traditional Thanksgiving bird. Its subtle flavor profile is characterized by mostly roasted-malty, vegetal-potato and green-grassy aroma molecules, so there are loads of different ingredient matches for this popular poultry—some of which may surprise you!

Our analysis of roast turkey meat confirms that it has a fairly simple aroma profile, as you might have guessed. However, it provides an ingredient link to many of the traditional sides that we pile onto our plates during Thanksgiving and Christmas. So it’s no wonder why classic trimmings like stuffing, mashed potatoes, brussels sprouts, sweet potatoes and cranberry sauce appear on our holiday tables year after year. 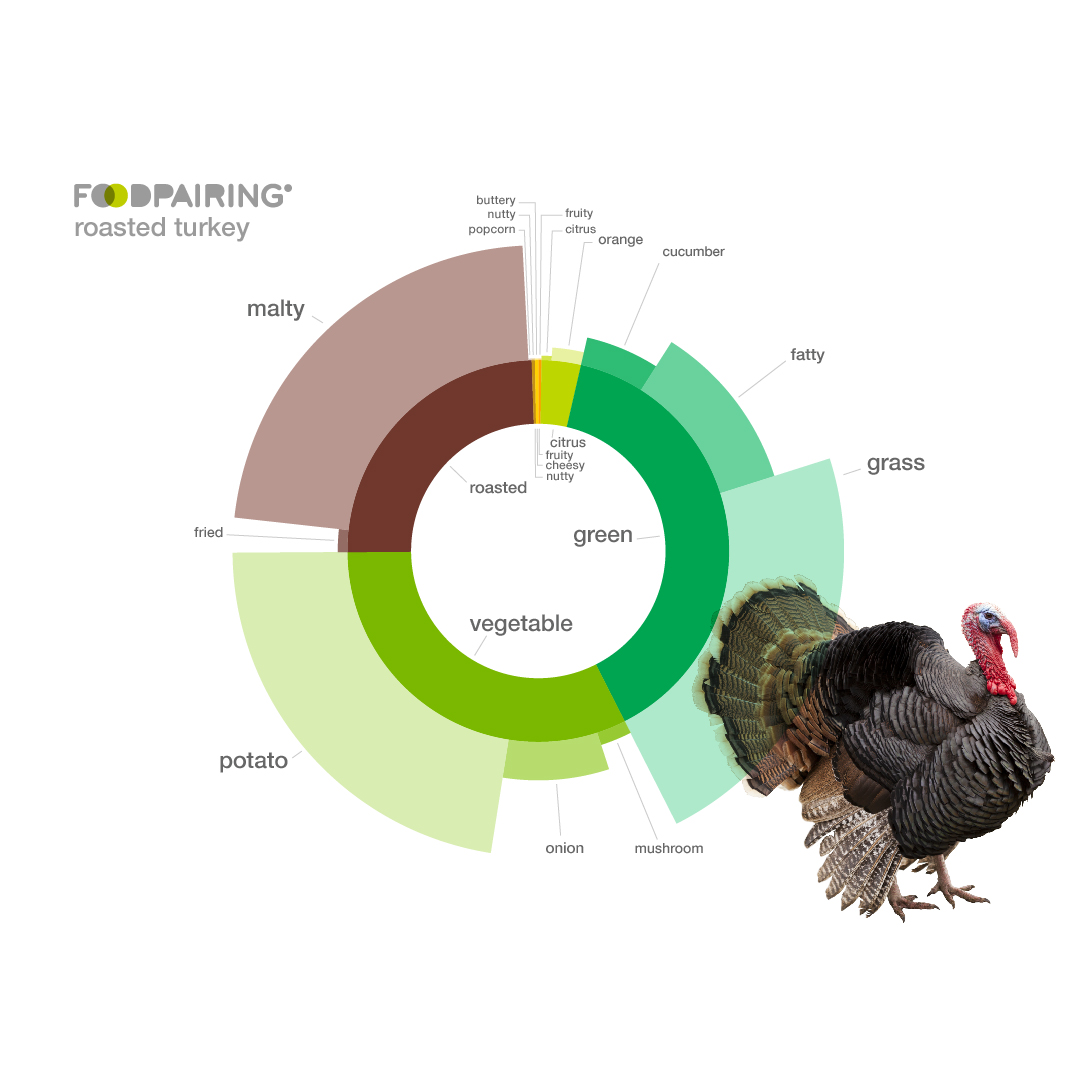 Upon closer examination of the aroma wheel, you’ll notice that roast turkey meat contains more than just its green, vegetal and roasted notes. It also contains trace amounts of citrusy, fruity, nutty and cheesy aroma molecules. This allows us to pair it with ingredients such as oranges, pomelos, pineapples, carrots, parsnips, ginger, lemongrass, cilantro, chickpeas and hazelnuts—all of which contain citrusy notes. (Here’s an idea: try stuffing your turkey with oranges, pomelos and fresh herbs to infuse extra flavor into your bird and help retain moisture!) Other fragrant fruity matches include cranberries, figs, sweet potatoes, corn, green beans, almonds, walnuts and urfa biber (otherwise known as isot or Aleppo pepper).

If you like a bit of texture in your side dishes, consider using crunchy hazelnuts or almonds, which share the same nutty aroma molecules that we find in roast turkey meat, apples, apricots, cherries and black truffles. And if barbecuing your Thanksgiving bird is your thing, fire up that grill and be sure to use wood chunks. The wonderful smoky quality that comes from grilling or smoking with hardwoods provides a cheesy aromatic link to turkey meat. Who knew? You can also try pairing your turkey with strawberries, cream cheese, balsamic vinegar and mirin, which contain the same cheesy-buttery notes. 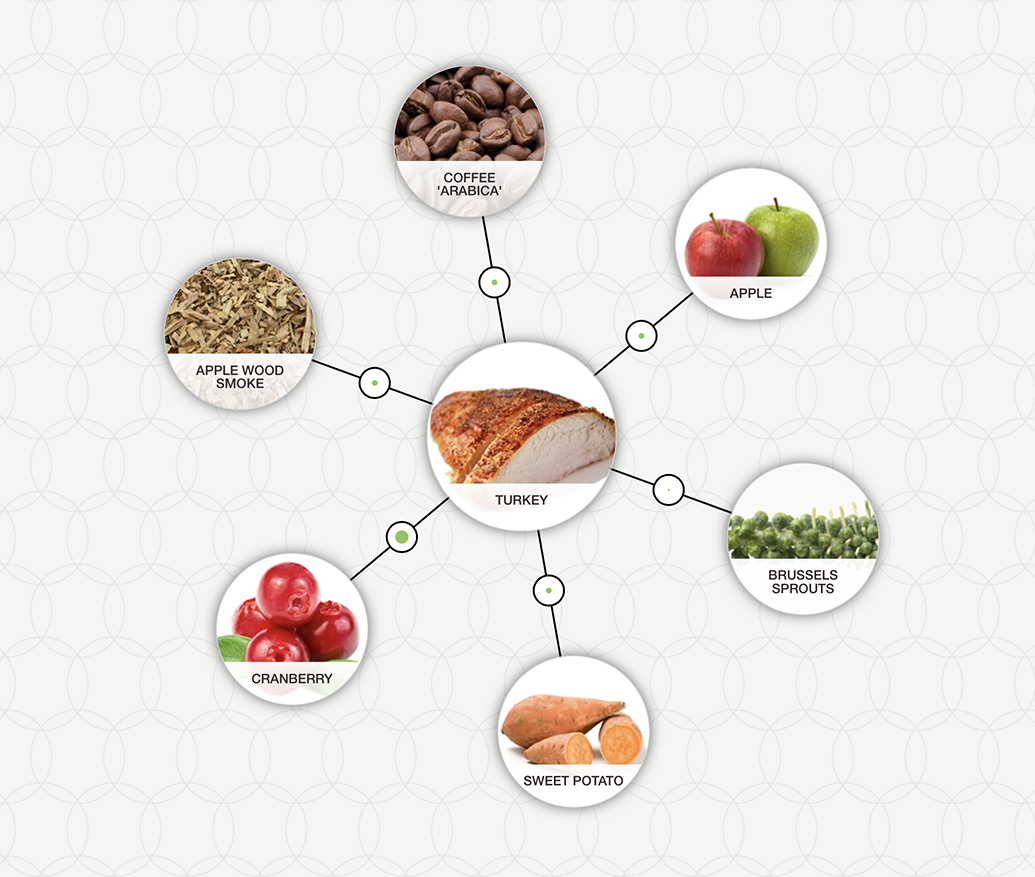 Turkey Day traditions around the world

Americans aren’t the only ones who love a good turkey. It’s also the centerpiece of the Christmas feast across the pond in Britain, as well as right here in Belgium. Turkey Day trimmings in the U.S. typically include mashed potatoes and stuffing with gravy, biscuits, candied yams, green bean casserole with fried onions, roasted vegetables and the requisite cranberry sauce. It wasn’t until the 1950s that turkey became a yuletide staple in England. A certain degree of culinary crossover now exists between today’s traditional American and British holiday foods. The Brits enjoy their Christmas feast complete with stuffing made with onions and sage (sometimes shaped into balls), roasted or mashed potatoes, Yorkshire pudding, mince pies, brussels sprouts, carrots, parsnips and cranberry sauce, as adopted from their American cousins.

Roast turkey provides an aromatic link to many of the traditional sides that we pile onto our plates during the holidays like stuffing, mashed potatoes, brussels sprouts, sweet potatoes and cranberry sauce.

Believe it or not, but roast turkey for Christmas is also a thing here in Belgium. Our holiday turkey tradition dates back to the end of World War II, following the country’s liberation by the Allied forces. In Belgium, our holiday menu includes stuffed turkey roulade with potato croquettes; roasted vegetables like butternut squash, celeriac and mushrooms; Belgian endive salad and baked apples topped with a cranberry compote.

Discover your own roast turkey pairings with our Foodpairing® Tool by subscribing now. Already have an account? Log in. 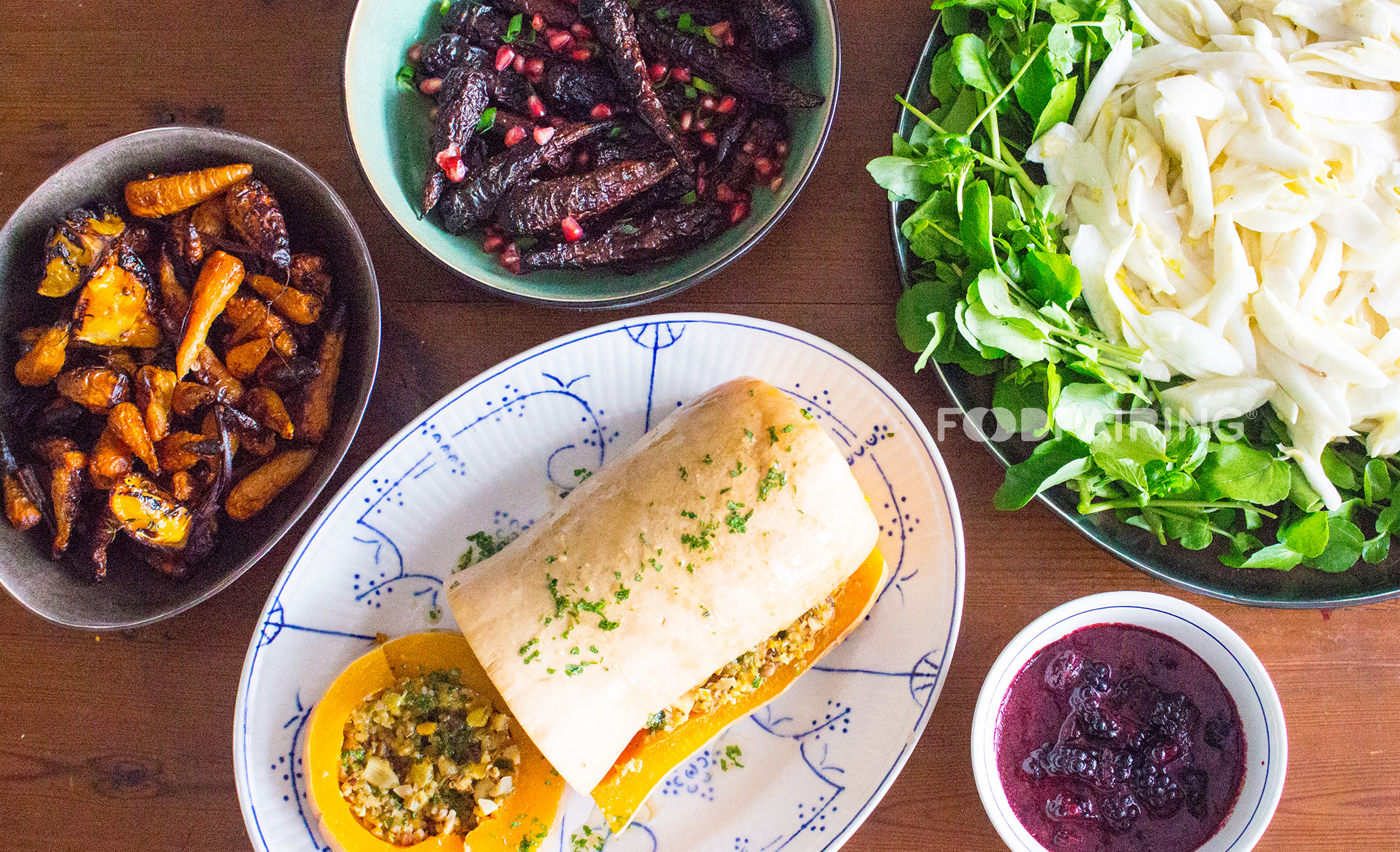 Not into turkey? No problem! We’ve got you covered with our veg-friendly version of roasted butternut squash stuffed with mushrooms, bulgur wheat, nuts and raisins. And, as a festive twist on holiday tradition, we’re even skipping the cranberry sauce and pairing it with a blackberry-port sauce.

Find the recipe for our stuffed veggie turkey roast. >> 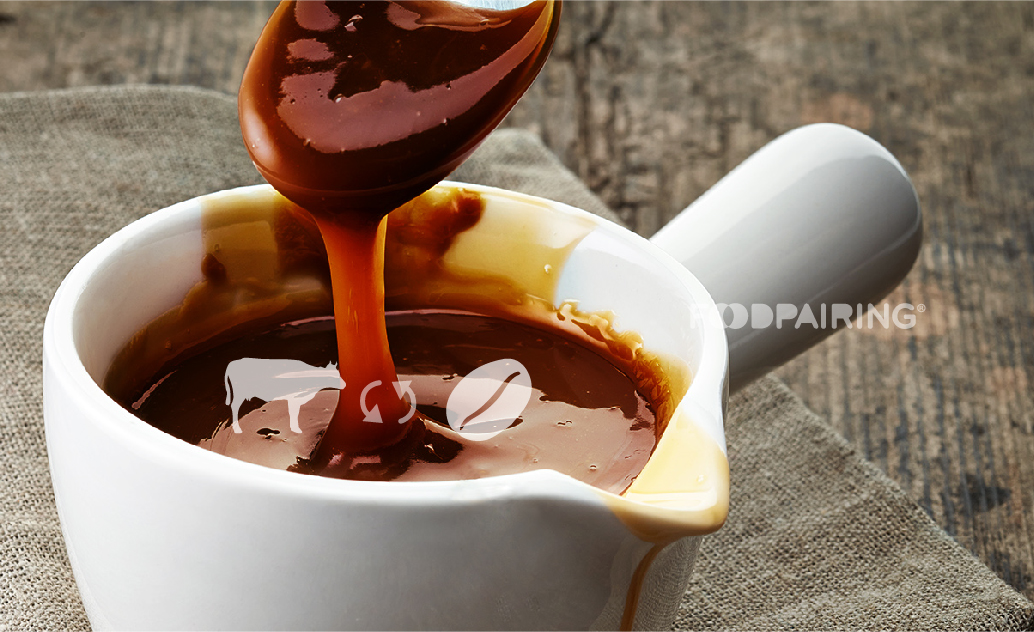 There’s no need to worry about running out of gravy if you’ve got soy sauce and a fresh bag of coffee lying around in the kitchen. That’s because coffee and soy sauce share the same roasted aroma molecules present in veal fonds and cooked turkey meat, which also contains green, vegetal and citrusy notes that link it to the vegetables and herbs we use in this vegan demi-glace. Believe us, you won’t miss the meat!

Find the recipe for our vegan demi-glace. >>